Harry Potter and the Chamber of Secrets: Chapter One to Four

Previously: I have a friend (Gianina) who hasn't read the Harry Potter series (well, she's read book one now!) and out of solidarity, I am re-reading the entire thing with her.

1. I'm reading from the British epubs from Pottermore, but I'm using the art from the American epubs because those are the ones I grew up with and I am attached to them. :)
2. I'll blog about it when I can, but we're doing two chapters a day so it's a bit gnarly, schedule-wise. So, I'm a bit behind with the blogging, IRL, I'm already on chapter 7 and 8, but I think I'll only be covering 1 to 4 here.
3. There's a tag on this LJ: potter re-read 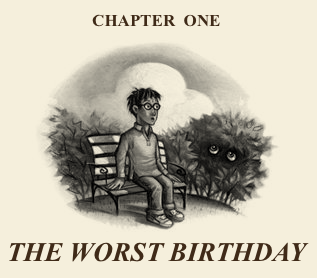 So, we start book two firmly on the save-Harry-Potter side of things. The Dursleys are doing the best they can to quash Harry without ruffling any feathers (except for Hedwig's! Dear, sweet Hedwig who can't even fly around and hunt.) and Harry's missing Hogwarts (who wouldn't miss Hogwarts?) and is worried about his homework. Which is odd to me because I am p. sure you have no homework to do over the holiday, especially between years, Mr. Potter? Anyway, the Dursleys are preparing for this big dinner shindig with the Masons, and it's HARRY'S BIRTHDAY and nobody gives a fuck (except me) and no one's written him any letters. There's this scene where Harry's singing 'Happy Birthday' to himself and it is one of the saddest things ever, until Dudley comes along and makes him feel even more terrible about it, which is... pretty much all the Dursleys ever do anyway. There's a bit here where Aunt Petunia tries to thwack Harry in the head with a frying pan and I SWEAR TO MERLIN, DURSLEYS. 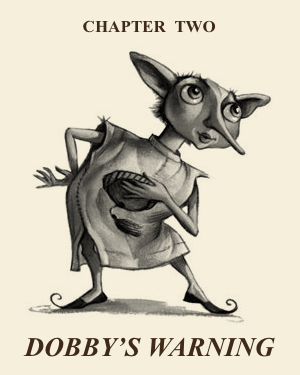 I distinctly remember hating Dobby's guts when I was a kid. I understood that he was a slave, and that he had his limitations, but tiny!Hope was very frustrated on Harry's part. It's interesting that Dobby actually bothered to warn Harry about his master's plot, though, as all the other house-elves we meet in the books are happy being what they are. Apparently the Malfoys are just that terrible that they make a being whose entire species is devoted to subservience and being basically invisible, revolt. Although, this is the first we hear of house-elves in this series, and it's all very confusing that there's this green-eyed thing shouting in Harry's room and dropping puddings and warning him about EVIIIIIL. AND HOLDING HIS LETTERS, which tiny!Hope was especially angry about.

There's a bit here where Harry's like, is it Voldemort, and Dobby is all NO IT ISN'T HE WHO MUST NOT BE NAMED SIR, and all Harry can muster up (dear, sweet, twelve year-old Harry Potter, please protect him) is, "He hasn't got a brother, has he?" I mean, come on.

We first hear of Mafalda Hopkirk here, and she has one of my favourite wizarding names, and Harry gets a warning for practicing underage wizardry in the house. Which means to the Ministry, all magic tastes the same. You'd think that non-wand, house-elf magic would be different, or something, or that they'd have specialised wards over Harry Potter's house, but no. It's all the same. I figure houses with adult wizards get a free pass then? All magic is magic in the dark? So the Dursleys lock poor Harry away in his room, install a fucking cat flap, and feed him tinned soup, and that's totally fine with the Ministry because they don't give a crap as long as their underage wizardry thing is followed. Never mind child services and the fact that someone threw Neville Longbottom out of a window, or that Harry Potter is starving. DUMBLEDORE, I BLAME YOU. 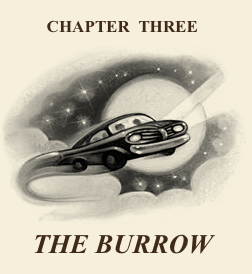 So, the first thing Harry tells the Weasley boys is that a strange house-elf visited him in the night and gave dire warnings. Everyone thinks it is a schoolboy prank, that silly Draco and his silly schemes. I swear to Merlin. Still, thank goodness for the Weasleys, because not only do they rescue Harry, but they show him what a loving family is like. The Burrow is just as important as Hogwarts, I think, and it made tiny!me really happy to read about this big, bustling family working around each other, arguing, and just co-habitating in relative peace. Sure, they picked on Percy (and the number of times he could polish his Prefect's badge, wink wink) but he was /their/ Percy, you know? And Mrs. Weasley, showing Harry some maternal love, and Mr. Weasley's enthusiasm and engagement with his own family and their lives. Weasley feelings. (Ron was basically just the vehicle for Weasley family affection (I kid, Ron fangirls, I kid).) 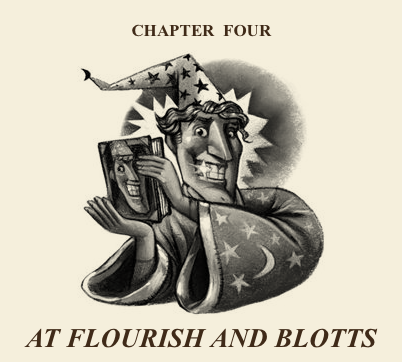 "What Harry found most unusual about life at Ron's, however, wasn't the talking mirror or the talking ghoul: it was the fact everybody there seemed to like him." #PROTECT HARRY POTTER 2014.

Okay, moving on. So the kids get their Hogwarts letters together with a really, really long booklist full of Gilderoy Lockhart's terrible books, and it is just really amazing how J. K. can write such truly annoying and skeezy characters, because GILDEROY LOCKHART, was as much a villain in this novel as the amorphous non-presence of Voldemort, and Malfoy's ambitions. It's just I SWEAR. TO. MERLIN, DUMBLEDORE. I know that the DADA position is difficult to fill and you don't want to use up good witches and wizards on a teaching position when you can save them for the coming war, but come on. COME ON. Go over their syllabus, at least.

(" 'I'm very busy with school work, of course - 'How can she be?' said Ron in horror. 'We're on holiday!' " Harry you really don't have homework, do you. I don't blame you for exaggerating your distress, what with the Dursleys being their own distressing vortex of misery.)

The Weasleys, and Harry, go to meet Hermione and her muggle parents in Diagon Alley. They use Floo Powder here, and I've always found Floo Powder the most interesting method of wizarding transportation, because it's always seemed so odd to travel by chimney flue, like demented wizarding Santa Clauses, and later on in the series, we find out you can use it like a telephone! Harry's first experience with flooing goes awry though, and we get to see Knockturn Alley, and meet Lucius Malfoy.

He's a lot colder and smoother than you'd expect the father of Draco Malfoy, who's painted as a very common school bully until we realise the source of his prejudices. He tells Draco that it isn't "prudent - to appear less than fond of Harry Potter" which shows you immediately that to him, appearing in line with public opinion is how the Malfoys live and survive, then he insults Malfoy by denigrating muggleborns (Hermione, pretty much), and then he sells off potentially dark materials to throw off the scent of the Ministry while insulting Mr. Weasley who is only doing his job come on Malfoy. (Okay, an aside, you expect that kids will be kids, and that they'll grow out of their childhood meanness, but no, it's just a symptom of darker shit at home guys. Mean children do not outgrow meanness unless someone tells them they're doing it. They ape their parents and contribute to a cycle of abuse and terrible behaviour.) Lucius Malfoy, could you please love your son without poisoning him, kthanx.

Thankfully, Hagrid plucks Harry out of Knockturn Alley, and we get to see him hang out with his friends and have delicious ice cream, which is enough to salve my mind after reading about the Malfoys, and go to bookstores! Wizarding bookstores seem wonderful, and I would love to go there and poke around and learn as much as I could. Too bad our wonderful bookstore experience is ruined by a) fucking Gilderoy Lockhart, and b) fucking Lucius Malfoy, and c) their fucking private agendas. I SWEAR TO MERLIN.

At least we've got this beautiful but where Ginny stands up to Draco Malfoy (and launches a million love-hate ships) to defend Harry.

I have a terrible cold and I feel as though my eyes are going to pop out of my skull from the pressure. Ugh.