When I first told my mother that I wanted to take up biology in university, she shut me down immediately and said to return with a proposal and a ten-year plan from graduation from university. (This is a story that I've told and written so many times. The words change, but the events stay the same, and the spirit still runs through it like a strong current.) It makes sense in hindsight; no one really thought that I would want to be a scientist. I had been fairly inquisitive and bright when I was a child, and I did like performing experiments and reading scientific books, but majority of my time in school and at home was spent reading and writing. Everyone who'd known me was fairly sure that I'd be a writer of some sort when I grew up, and I had some teachers who demurred from writing me recommendation letters for university, on the grounds that my high school was encouraging me to stick to what they considered my proper path.

It stuck in my craw back then, but it's just laughable now that I'm writing this blog post.

I managed to convince my mother that enrolling in Biology would be a good idea. I had a PowerPoint presentation and everything. It was probably less persuasive than it was passionate, but it must have worked. I got into a solid Biology program at DLSU, and probably spent the first trimester feeling smug at the nonbelievers. Biology wasn't difficult, and while I was a terrible student in my undergraduate years, fully convinced that I had to maximise my youth while I had it, there was so much to learn that the classes I did attend were delightful. (I really do not endorse the Hope Swann method of being an idiot student.)  The only truly difficult part was my thesis, and even that feels less like difficult and more like tedious in hindsight, even when I factor in the months of mousekeeping I did.

Graduate school was painful. The pain didn't come from the work, as the classes were not difficult, and I was really lucky enough to have had the professors I had. The pain came from almost having to give it up. It took me ages to finish my master's degree because I had to stop so many times, and every time I stopped, I was always half-convinced that that would be it, that would be the end of everything. If I did not have the support system I have, if I did not have the mother, or the friends, or the wonderful and perfect thesis advisor, I doubt that I would have made it.

I'm a little over past the halfway mark in my ten-year plan. It's a bit frightening to think that I'm following the blueprints of a harebrained scheme an equally harebrained seventeen year-old thought up back in the early 'oughts, ten years ago (not to be confused with the ten year plan), but it seems to be working for me. I'm a bit delayed, but teenage!me could never have foreseen the things that have happened, and she could never have prepared for it. Experience, and the wisdom that comes from it, are bitter replacements for the vision and passion I had as a teenager.

It's been a few days since the graduation ceremony, and I'm still not a hundred percent convinced that it's truly over. When I was working on my master's thesis, I would stop every so often to try to imagine what it would feel like when it was done. I'd imagined something more conclusive, an all-encompassing feeling of relief and triumph. I suppose that follows after the numbness and confusion pass. I hope that things become better, that I will start feeling things again, and that the remaining years in my ten-year plan (and fucking beyond that) will be as wonderful and fulfilling as I had thought they would be. And on that happy note, hurrah, I guess. 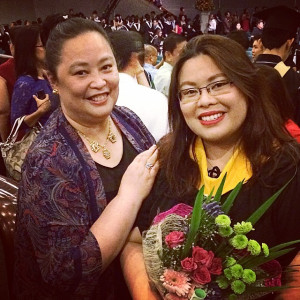