[books] the pleasure of my company

Last week, I went to Komiket! I got a LOAD of things, such as comics by my friends: issue #2 of the well-marketed Ligaya Fatima Bergonia and Adrienne Onday, Itch by Michelle Cervantes, and Think Kill #1 by Paul Salonga and Mong Aya, as well as comics by people I adore and would love to become friends with (pero FC nalang. like, from afar. very far away. much distance): Patay Kung Patay by Noel Pascual and AJ Bernardo, Uy! Si Crush by Blue Indie Comics, and Halina Filipina by Arnold Arre (the one, the only, the man, the myth(ology class-writer), the legend)).

The thing is though, you just don't waltz into Komiket, grab your shit, and go. You have to really fucking immerse in the event place,  brush elbows with komiks kogniscenti, pick up comics you've never heard of, and just... spend way more money that you should. Komiket's a great place to see artists' work and grab some fine and moving art. So here's a picture of my haul, for documentation's sake. 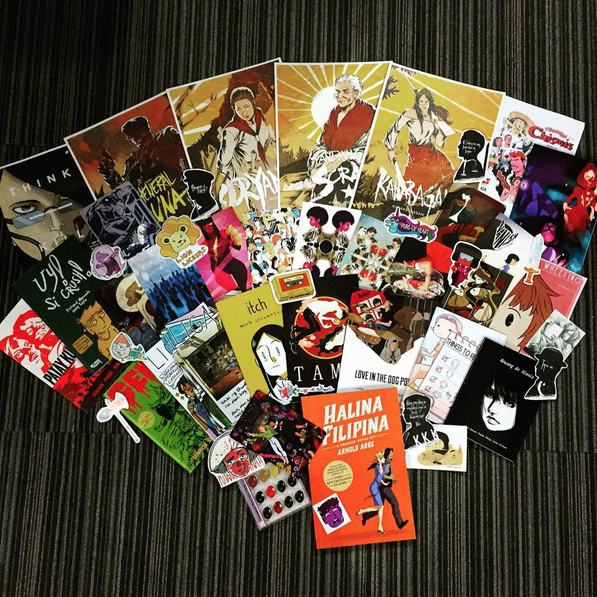 I know for a fact that I didn't spend even a third of what I wanted to, but my buddies begged for prudence. I was enamoured by most everything I bought, and I hope that future comic events are just as fulfilling (November 14 sa Bayanihan!).

A lot of the authors I follow released books this week: Empire Ascendant (Worldbreaker Saga #2) by Kameron Hurley, Ancillary Mercy (Imperial Radch #3) by Ann Leckie, The Sword of Summer (Magnus Chase and the Gods of Asgard #1), Six of Crows (Six of Crows #1) by Leigh Bardugo, Carry On by Rainbow Rowell, and Shadows of Self (Mistborn #5) by Brandon Sanderson. Only one of them is a standalone novel, Carry On, and even that is a spin-off of Rowell's beautiful novel Fangirl. I honestly am trying to keep up with new releases this year, but it is a challenge! An enjoyable one, of course, but definitely still a challenge.

I managed to sneak in some reading despite work and, um, other interesting upheavals in my life, though! So let's talk about them. 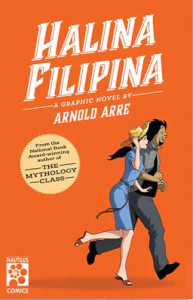 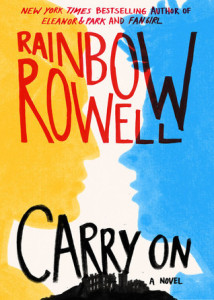 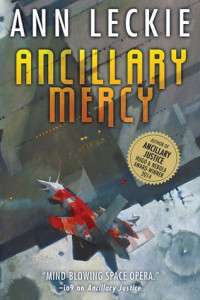 Halina Filipina by Arnold Arre It's been around seven years since Arre messed my emotions up with Martial Law Babies. I'd heard that he was releasing something new, but I literally had no idea about the subject matter of his book until I read it. I trust Arre completely, and he could write a book about sticky notes and it would become a stirring graphic novel about the travails of Best Buy brand notes in comparison to Post-It notes and relate it to national identity. Because Arnold Arre is a man whose writing will not fucking quit. Anyway, I went into Halina Filipina blind, and I left it blind because, READER, I COULD NOT SEE THROUGH THE TEARS. Arre writes a poignant (this is not my favourite word) story about identity and home through the interaction of Halina, a Fil-Am woman who came to the Philippines to discover her roots and find a family, and Cris, a disaffected Filipino who is trying to eke out a life doing what he loves. HF may seem like it could nestle comfortably in the MPDG trope, but Arre avoids it cleanly by writing a sincere and earnest story. Love, love, love it.

Carry On by Rainbow Rowell In Rowell's Fangirl, the titular fangirl, Cather, writes fan fiction about the (also-fictional but loving expy of the Harry Potter franchise) Simon Snow series. Rainbow Rowell decided to take the meta a few steps further by releasing Carry On, an actual novel with Simon Snow as the actual character. Now, I loved Fangirl a whole lot, and I loved Harry/Draco fanfiction so much around ten years ago (Oh, lord), so I was unable to resist this book, especially when Lev Grossman himself gave the cover blurb. However, I didn't like it as much as I thought it would. The characters and story themselves stand up a whole lot better than you would think, considering that it's a single novel from the end of a series that doesn't exist, but that is exactly the problem. It's a single novel representing a whole series. Rowell tries to fill the gaps in heroically, and I really tip my hat at her effort to make the world coherent and the character's compelling despite the handicap, but it just wasn't enough. I enjoyed most of it, but I really feel as though it could have benefited from more world and atmosphere-building to really bring it home. Good enough, but not great.

Ancillary Mercy (Imperial Radch #3) by Ann Leckie Okay, some disclaimers first. Y'all (um, referring to the all who've been reading this blog for a while now) know that I loved Ancillary Justice and Ancillary Sword when I read them last year. I had high expectations for the final novel in the Imperial Radch series. Unfortunately, much like how the Presger translator clucked at Breq about seeming to understand a conversation and turning out to not really get it, apparently I didn't really understand where Leckie was going with her trilogy. I was expecting great, sweeping things from the final novel, especially since Sword was so intimately written, an obvious microcosm metaphor for the whole empire. However, Mercy continues in the confines of Athoek Station, and despite the important victories that Breq and her crew won there, I do feel that Leckie overextended her metaphor. The book itself is solidly written. A lot of the character interactions are AMAZING and caused me so much pain. But as a third novel? As the final book of such a promising and brilliant series? It wasn't enough for me. I was honestly disappointed by how it ended, and I think I'm going to pretend that there's a fourth book coming out so that I can love Mercy for itself.

Obviously, I didn't get to finish Fulgrim, so my Next 20s and "Reading Nexts" still stand.

Next 20 Reads:
1. Gardens of the Moon (The Malazan Book of the Fallen #1) by Steven Erikson
2. Diaspora by Greg Egan
3. Abarat: Days of Magic Nights of War (Abarat #2) by Clive Barker
4. Briar Rose by Jane Yolen
5. Genocide of One by Kazuaki Takano
6. The Man Who Knew Too Much by G. K. Chesterton
7. Lives in Ruins: Archaeologists and the Seductive Lure of Human Rubble by Marilyn Johnson
8. The Man Who Mistook His Wife for a Hat by Oliver Sacks
9. Cloud and Ashes: Three Winter's Tales by Greer Gilman
10. She of the Mountains by Vivek Shraya
11. Atonement by Ian McEwan
12. Sans Moi by Marie Despleschin
13. The Angel's Game (The Cemetery of Forgotten Books #2) by Carlos Ruiz Zafón
14. The Sparrow by Mary Doria Russell
15. The City and the City by China Mieville
16. Rose Daughter by Robin McKinley
17. Brothers Karamazov by Fyodor Dostoevsky
18. A Canticle for Leibowitz by Walter M. Miller Jr.
19. Life During Wartime by Lucius Shepard
20. In the Heart of the Sea: The Tragedy of the Whaleship Essex by Nathaniel Philbrick
Tags: books, comics
Subscribe