I'm just going to continue where I left off last time. I have one more Blogging Backlog post to do before I'm up to speed with my reading, and I really, really would like to do that before the 27th rolls around. Crossing my fingers. 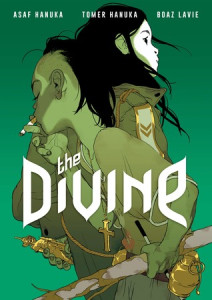 I've actually been waiting for this one for a while, but I wasn't able to get a copy until this month. It's a self-contained story, relatively short and easy to read in one sitting if you aren't careful. However that short period of time will be pretty fucking intense; one of those really small stories that discuss bigger themes. I kind of wish that it were a bit subtler, but other than that Divine is the kind of read that'll stay with you hours after you read it. You'll be flashing on bits of dialogue, or fixating on a burst of colour, or the sumptuousness of a curved line, or the jingoistic tendencies of some developed nations and the kind of people they churn out. :) Magical realism is always great, magic realism in comics can be iffy if your artist doesn't manage their pages well enough, but this book is beautifully balanced, in my limited opinion. A lot of the action and magical sequences are easy to follow and well-illustrated. 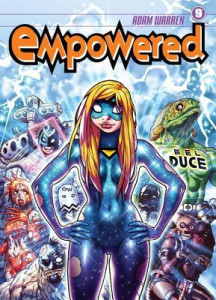 So, I don't know about you guys, but I got into Empowered a few years back because someone, I've forgotten who it was, told me that the cheesecake (pin-up softcore bondage fanservice love) was delicious, and that it was a funny series. That was around six volumes ago. Now I'm here at Volume 9, wondering where all the happy-funny went. :)) I mean, it's still funny, like it has its moments of levity, but MAN, they are few and far between now. The cheesecake's managed to stick around though. I was reading this in public at Readercon and I could barely keep from tearing up, for multiple reasons, all of them painful and frustrating.  Not a lot of story happened in this one, we got very little resolution re: the previous volumes, but Emp got to show off the skills she's slowly been accruing over the course of her superhero career. Emp has grown up a lot, and I feel as though the world she's in has to accept that she's pretty damn awesome soon or all the readers will tear their hair out in frustration (LET THE WOMAN DO HER JOB, SHE IS LOVELY, WHY Y'ALL JERKS). Just checked out Warren's Twitter and he has this to say about Volume 10: "...brace yourselves for civilian Spooky, tight close-ups on Chinese food, psychokinetic chopsticks, and vicious tearjerkery." The man must be stopped. Please acquire Empowered. 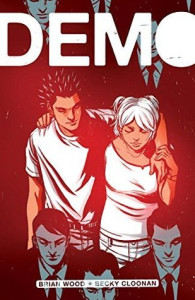 I really wanted to like Demo. Cloonan's art is mostly great throughout the whole collection, but I didn't find myself appreciating the writing. I understand the concept, like snippets and insights into different characters and their lives, but I feel as though I would've liked it more if Wood had given us more breathing room, allowed us to get attached to things before moving on. It wouldn't have been so bad if the writing were more even, like even if we weren't getting a lot of content, maybe we could get our minds blown with interesting situations and character designs, but majority of them left me cold. It would've been nicer if there'd been an overarching theme that united the stories, other than the whole powers shtick, but alas. I'm not saying, of course, that it's terrible, or to be avoided. It's just lacking in weight. Some of the concepts were pretty cool, and I suppose that that made it worse for me. Some authors are able to leave you wanting more AND yet feel satisfied, but Demo just didn't do it for me. 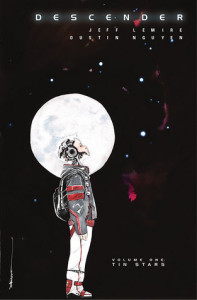 First things first: this book is BEAUTIFUL. Nguyen does everything in his trademark watercolours/inks, so each page is a diaphanous ripple of beauty. It develops a bit slower than I'd like it to, but I'm going to count that as meditative pacing as opposed to clunky. I admit that I came into Tin Stars with a lot of trepidation as Descender has been seriously being hyped up. I mean it was optioned for a film prior to even releasing the first issue, so everyone was kind of taken aback. I'm not quite committed to saying that it lives up to the hype, great art aside. There's a lot of interesting pieces being put into play for now, and you can see that Lemire isn't grasping for what to do with them; there's a sureness to his writing, a deftness that practically shouts "CHESSMASTER" to a reader, but it's like he has all these pages and very little being developed. I've caught up to the floppies after reading this trade, and there's still very little to go on despite there already being eight issues out, but I'm hoping it'll pick up soon. It would be a pity to have to drop something so pretty, especially with all these balls hanging in the air. 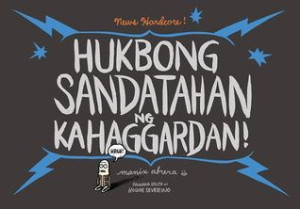 I've been following Abrera's work for quite a while now, but I'd never really paid attention to his News Hardcore!. I'd see snips of it floating to the top of my Facebook News Feed every so often, laugh a bit, then forget about it. When I found out that he was releasing an anthology of the entire strip at Komikon, I told myself that this was it, this was the time to enlighten myself. I had mistakenly thought that News Hardcore! was a comic series that actually discussed the news. Wrong. This shit is about the people who collect, write, and report the news, making it about 1000% more interesting to me, a person who is so tired of actual news and all the ways Philippine media and social networking refracts facts into tasty tweets and listicles. News Hardcore! is HILARIOUS, but that isn't surprising considering it comes from Abrera's hallowed hands and mind, but it is also savage. It is delightfully savage, like if I were a journalist I'd be horrified to have all my sins and foibles exposed to the world if it weren't written and drawn so lovingly and with such graceful humour. A lot of it deals with a journalist's daily struggles, but there are also some lovely sociocultural commentary comics thrown in there, and it's a bittersweet read. I did have a problem with the fact that this book is massive for a comic book: large, thick, glossy sheets all bound into a huge volume that make it almost impossible to read outside of the house. But it's so worth the papercuts from the pages, and the bruises from the binding. I can't wait until Manix Abrera becomes a National Artist. :'D 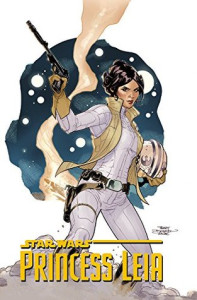 Princess Leia by Mark Waid and Terry Dodson
Who Decided on This Characterisation?

The new Star Wars comics being released this 2015 have been consistently great. I have been pushing them at people with mixed success, but I'm hoping that more people will get into them especially since The Force Awakens was just released. Most of the comics are set between Hope and Empire, and are building a pretty coherent 'verse for the franchise. Since the EU and all the old comics were stricken from the Star Wars canon (Moment of silence for the old comics and books) there's a lot of stuff that needs fleshing out and a lot of loose plot threads that need to be addressed in order to give the sequel trilogy a better foundation. Okay, but all of that aside, I did not like the Princess Leia comic. I was initially excited about the concept, Princess Leia saves all the remaining Alderaanians, but MAN, either I've totally misunderstood Leia's characterisation (small chance) or this is such a weird OOC series, especially in light of the other Star Wars comics where she is pitch perfect! Where is my acerbic and authoritative princess??? :CCC I mean, kudos to Waid and Dodson for maintaining her femininity, but this seems like she belongs more on Paradise Island than in the Star Wars universe. It's not terrible or disrespectful or anything, but it's just... off, to me anyway. More Leia please!