So, like I said in my last blog entry, I went to this year's Art Fair on Thursday with my cousin, Leanne, and our newly "adopted" cousin, Joshua. She decided to adopt him, I just stood by and rolled with it. I spent the morning with Feminist Futures in QC, and then rushed over to Makati so that I could make it. The Art Fair itself was a bit overwhelming because this year's fair took over three floors of the Link, as well as the Roof Deck for lectures. So. Much. Art. to the point of overstimulation. I actually got to go to the Art Fair twice this year, because my best friend, Sunshine, was only free on the last day of the fair, Sunday, and there were easily four times as many people as there had been on Thursday. It was a pretty cool experience, and I'm definitely attending next year's. 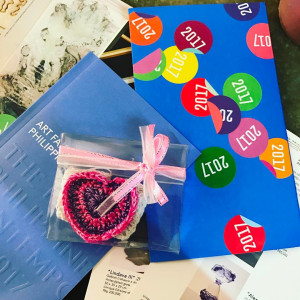 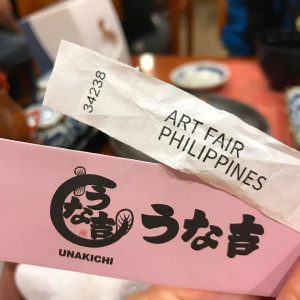 Fig 1. L: Art Fair 2017 swag with a crocheted keepsake I got from the Feminist Futures meeting. R: My Art Fair wristband from Sunday, as well as the chopstick cover from Unakichi, an amazing unagi restaurant.

Fig 2. A shitty video of my Instragram story of that day with all my favourite pieces from the fair.

I also ate a ridiculous amount of delicious food over the weekend since I was surrounded by close friends: Tim Ho Wan, Wildflour, Mendokoro Ramen, Your Local, and Unakichi, and oof, that was probably not good for my heart. I'll need to find a way to make it up to my body. Speaking of my body, another fun thing that happened over the weekend is that I got a cartilage piercing on my right ear as a bonding experience with my two cousins, Leanne and her sister, Ina. It was a pretty positive experience, despite the pain (literally broken into a sweat even though it was just a 2 on the pain scale), since we had our piercings done in P&P. It's been three days since I got the piercing and it's already a lot less sensitive to touch. Pretty cool, and I'm definitely going to do a few more in the future.

Komiket's going to be on the 25th, and I think I'm attending that unless deadlines prove too strong for me. I'm excited to go for the usual reasons, great comics, fun merch, breathing the same air as other comic lovers, but also because some of my friends will have a booth! Hope to see y'all there. 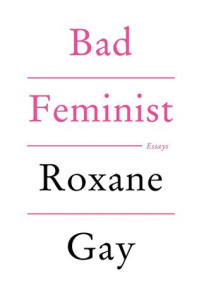 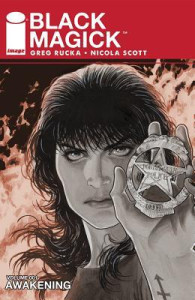 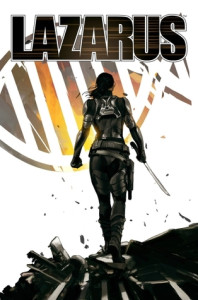 Bad Feminist: Essays by Roxane Gay I saw that Gay's new book of short stories, Difficult Women, was coming out this year, so I decided to finish this already. The essays are readable, if a bit painful to read, because of how relatable they are. A chunk of them revolve around pop culture and how she views them from her feminist perspective, albeit a very personal version of it. She considers herself a bad feminist because of that personal perspective, because she, like many other women, is inconsistent, biased, and flawed, in her perception of what is acceptable and unacceptable and the actions that arise from those perceptions. It was refreshing to read that she was so upfront about what she considers her failings since I have been struggling with my own "bad" feminism. Some of the essays feel a bit too personal, but all in all I enjoyed the collection. Looking forward to reading Difficult Women when I get around to it.

Black Magick, Volume One: Awakening by Greg Rucka and Nicola Scott is comprised of the first five issues of the series, and I am sorry to say that there don't seem to be more coming. Both Rucka and Scott are favourites of mine, mostly because both they illustrate complex female characters, albeit in different ways. Black Magick is a straight-up fantasy, where the main character is a literal witch with literal magick, yes, with a "k", powers, who also happens to be a police detective. Because we've only gotten five issues of this series, a lot of it is Rucka laying the groundwork for what I could tell was going to be an epic story, but as a single volume, I kind of just felt cheated by everything we'll never get. Majority of the comic is done in grayscale, except for when magick is being performed: you then get bursts of colour that really highlight the difference between magick and the mundane. So much potential, but no pay-off. SIGHS.

Lazarus: The Second Collection by Greg Rucka and Michael Lark Thankfully, Lazarus is still going strong. I read the first ten issues of Lazarus a couple years back in the first collection they released, and I really enjoyed it so I was pretty pleased to find out that issues 11-20 were released in another collection. There are only 25 issues out so far, and the current story arc will finish in the 26th issue, so I'm really excited (and terrifed that Rucka's going to kill some of my favourite characters). The world of Lazarus is a dystopian one, where countries and regions are ruled by businesses. The world is divvied up between different business families that came to power when various governments failed and economies crumbled under the strain. Each of the ruling families has a "Lazarus", a genetically-modified super soldier that acts as their champion in interfamily disputes as well as handles the security of the family within their respective demesnes. The MC of the comic is Forever, the Lazarus of the Carlyle family, and in the current collection she's dealing with a lot of problems, both from inside her family as she struggles with her role in it as well as her personal identity, and also because of interfamily dynamics. The world is pretty well thought-out, and I have an especial affection towards the Lazari and how they interact with each other when they're off-duty. It's a pretty brutal system, all-in-all, and Rucka manages to touch on a lot of topics as he writes the greater story.
Tags: books, life
Subscribe